The Obaku sect is one of Japan’s three major Zen Buddhism sects with its head temple Manpuku-ji located in Uji City, Kyoto.
Manpuku-ji was founded about 350 years ago. The main building survived a number of natural disasters and the ravages of war remaining as was founded and has been designated as an important national cultural property.
The temple also houses several treasured articles which have been designated as important cultural assets as well.
We heard that our data loggers were being used in their “Bunkaden” building where these treasures are stored and exhibited, so we took a trip to Uji to find out more about how they are using our loggers.
We spoke with Mr. Nobutaka Hisatsune, the main priest at Manpuku-ji.

* Zen is a type of Buddhism which stresses the use of meditation as a way of training and finding enlightenment.

Q: First of all, could you give us a short introduction to Obaku Manpuku-ji Temple (from here Manpuku-ji)?

Mr. Hisatsune: Of course. Manpuku-ji was founded about 350 years ago in 1661 by the Chinese Zen priest Yinyuan Longqi (Ingen in Japanese).
At that time he was the head priest of a Rinzai Zen sect at a temple called Wanfu-si Temple on Mount Huangbo-shan in Fuzhou, Fujian Province, China.
(The Japanese reading of the Chinese characters for “Huangbo-shan” is “Obaku-san” and “Wanfu-si” is “Manpuku-ji”.)
During the closed doors of the Edo era, Japanese people were becoming less enthusiastic about Buddhism, so the 4th General Shogun Tokugawa Ietsuna invited him here to help.

After arriving in Japan, the Zen master, called Ingen, through his missionary work for Buddhism helped to breathe fresh air into the spirit of Japan and made great contributions to the development of culture.
His avid missionary work was recognized by the Shogunate and he was rewarded with the 297,520 sq meter plot of land on which he founded Manpuku-ji and became its first head priest.
Although Master Ingen had been brought up in the tradition of Rinzai Zen, his teachings in Japan and the temple rules and regulations he espoused were based on Ming traditions which differed from those of the Rinzai sect.
In the Meiji period, the government decreed that there were two sects of Zen, one being Soto and the other Rinzai and that the teachings of Ingen called Obaku were placed under Rinzai as a sub-sect. But in the 9th year of Meiji (1876) the government decreed that Obaku was its own independent sect. It has since grown and developed as one of the three major Zen sects. 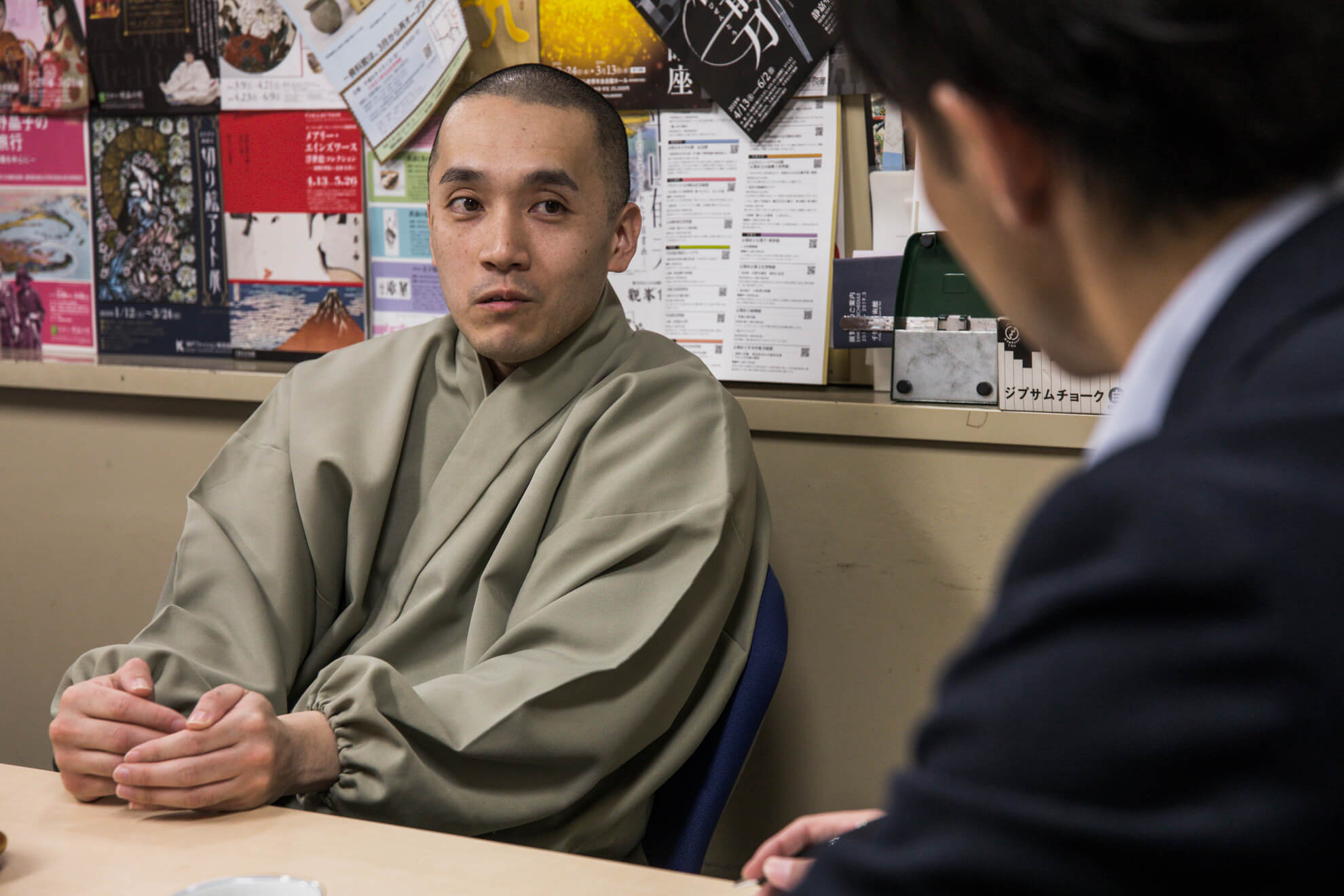 Q: To be honest I had never realized that Obaku was its own independent Zen sect. Can you tell me more?

Mr. Hisatsune: Yes, Obaku is one sect of Zen Buddhism. The other two are the Soto and Rinzai.
There are around 350 temples in Japan affiliated with the Obaku sect.

—After checking on the Internet I noticed that in Nagano Prefecture where our company is located there are over 1,600 Buddhist temples and about 13 of them are affiliated with Obaku.

Mr. Hisatsune: These days there are about 350 temples, but when this temple was founded there was a bit of an Ingen boom, so to say, and there were many more than there are today.
Truth is there are lots of things in everyday Japanese life that can be attributed to Priest Ingen.
For example “ingen-mame” (snap beans). His name was added to the bean (mame) upon him bringing it from China. Also watermelon, lotus root and moso bamboo.
Also the architectural style and sutra signing style are all of Chinese style. The chanting style uses many musical sounds and ringing of various kinds.
The buildings here were designed and built using Ming style architecture and when typing in Japanese on a PC many people use Mincho font, that style of writing is also attributed to Priest Ingen.
If you come from a Buddhist family, you probably have or had a small altar at home and also a mokugyo (a small round wooden fish shaped percussive instrument). These were all brought by Ingen to Japan.
These days they are round but that is a relatively new form that evolved over time.
Originally it was really in the shape of a fish.
In fact, what is thought to be the original model is here at Manpuku-ji. We can take a look at it later if you like.

—Thanks, these details make me feel closer to him. 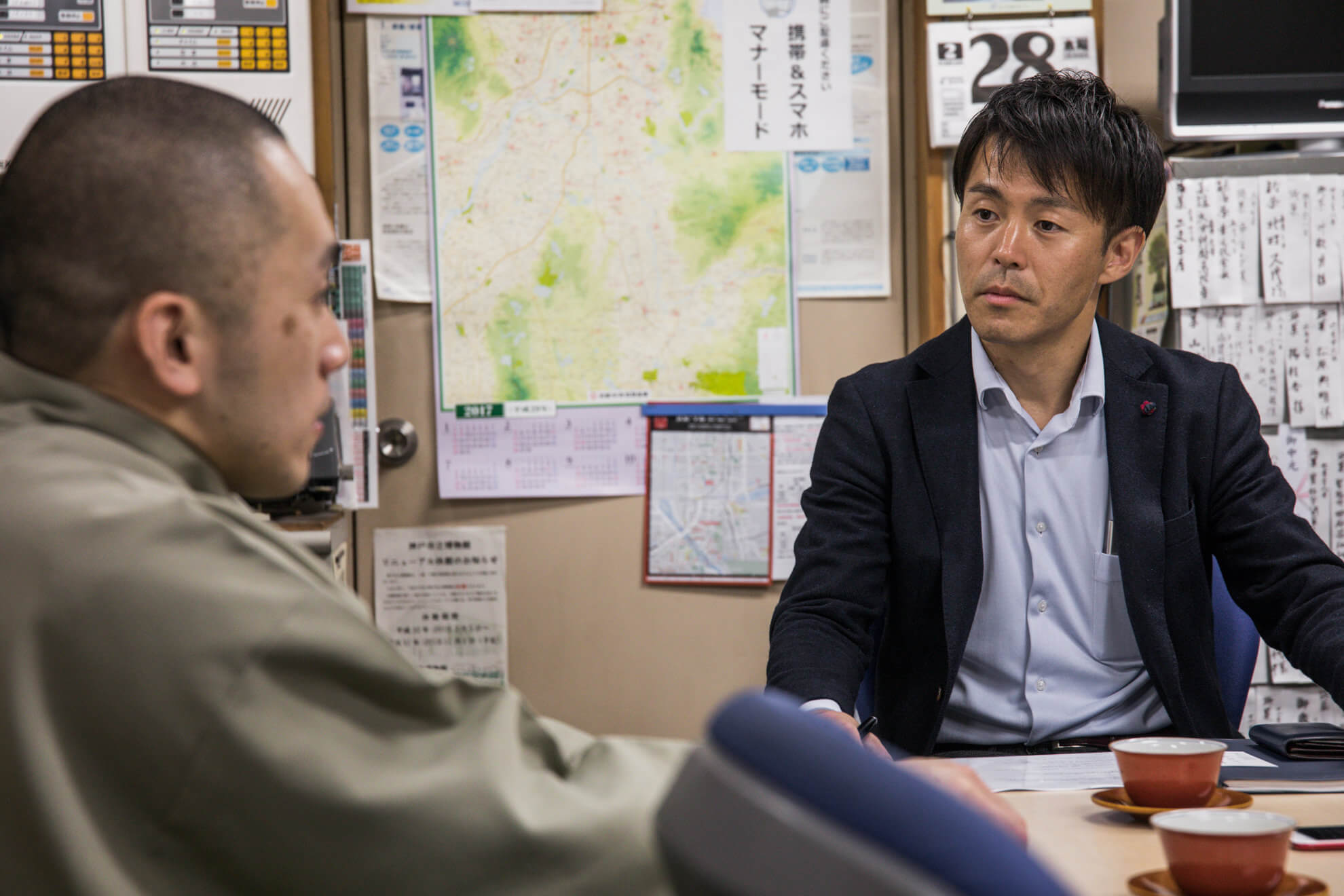 Q: Can you give me some idea about the teachings of the Obaku sect?

Mr. Hisatsune: The master-disciple relationship is one in which the master may sometimes strike the disciple with a stick or shout at them during question and answer sessions. It is through these repeated questions and meditation that the disciple comes to know the spirit of the Buddha. Zazen may be good for enlightenment but there is no assurance that enlightenment will be obtained. There is no single predetermined way or answer.
The training through repeated zazen, questioning and daily temple chores is to cultivate a state of mind that cannot be expressed in words. It’s my belief that for a Zen monk there is no end to their training. I guess it is commonly referred to as training until death. I think we should simply just devote ourselves to training, always aiming for the state of enlightenment that Buddha attained.

—They apparently also only eat a vegetarian style cuisine called Fucha-ryori and do not eat any animal products. With my self indulgent lifestyle I am afraid that I will never be able to reach the mental state of the monks….. (strained smile) . 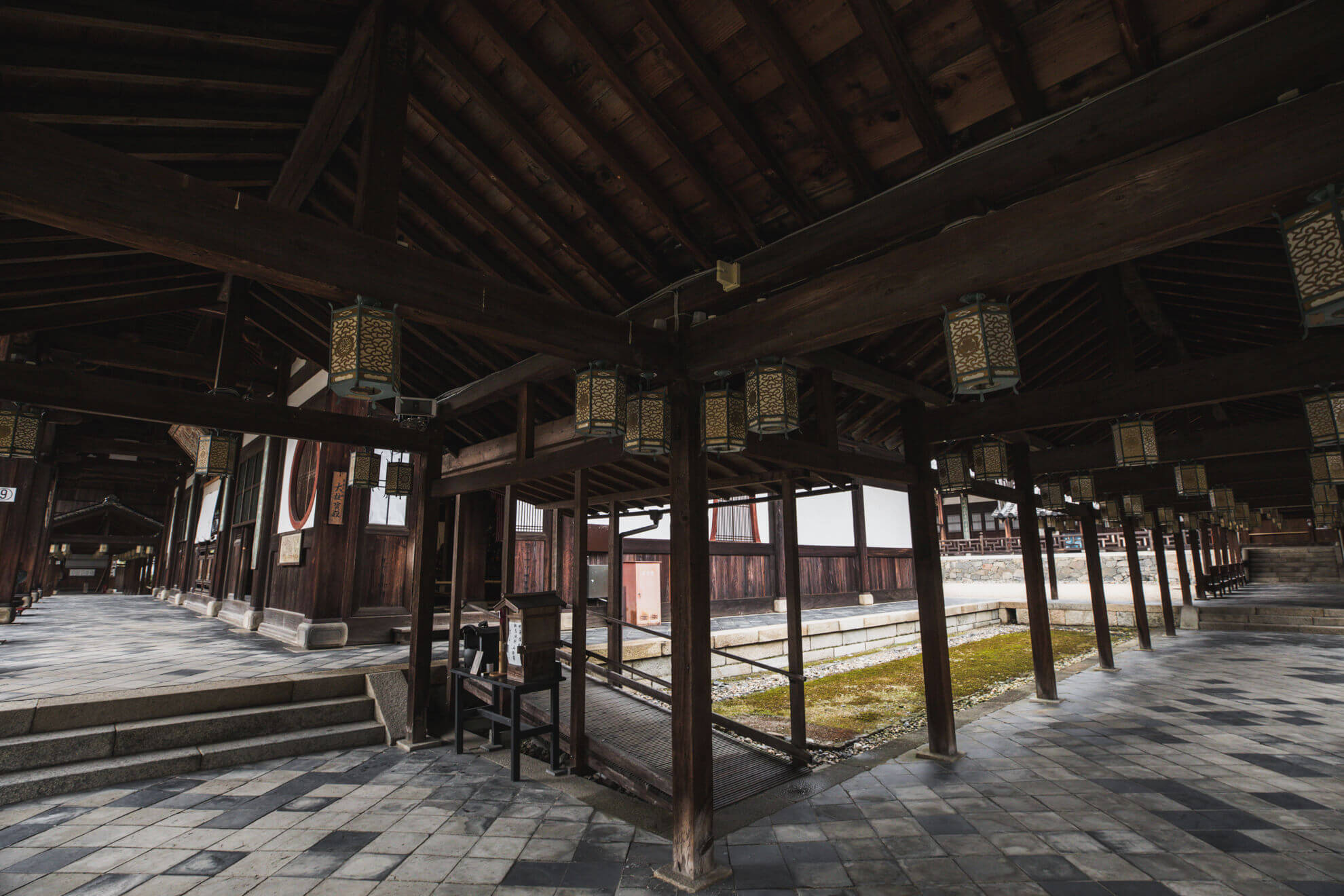 Q. I have heard that you have some very valuable treasures stored here and that you are using T&D data loggers to help protect them. Can you tell us a little about how you decided to use our products?

Mr. Hisatsune: Some of the pieces are designated as important cultural properties and are about 350 years old. In order to preserve them for future generations, we recognize that the most important thing is to control the temperature and humidity. When construction was finishing on our second treasure hall, we were looking for a product that would allow us to easily measure and monitor temperature and humidity. At that time, I did some research using the keyword “temperature management” and came across your company. When we were introduced to the system about six or seven years ago, we were surprised and intrigued by the fact that you offered a revolutionary system that could monitor temperature via network and wireless, and moreover that you offered a cloud storage service free of charge. Of course, we also received and reviewed proposals for equipment from various manufacturers. All of them turned out to be beyond our budget, but I thought that your products seemed cost effective, so we decided to purchase from T&D . 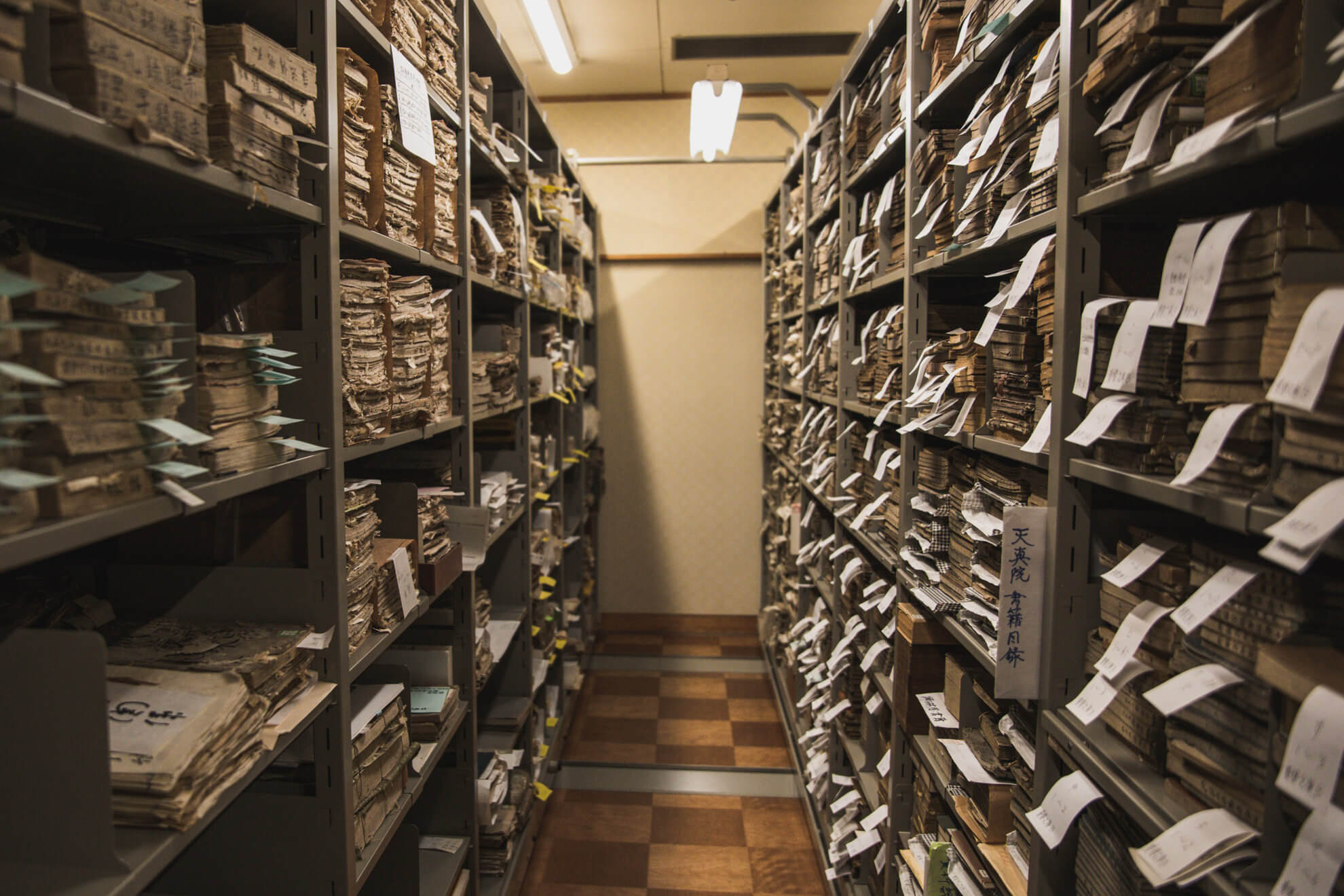 Q: Can you tell us more about which products you decided to purchase?

Mr. Hisatsune: For the Base Unit we use the RTR-500NW, RTR-503 loggers for measuring temperature and humidity and RTR-574-H for illuminance and UV measurements. 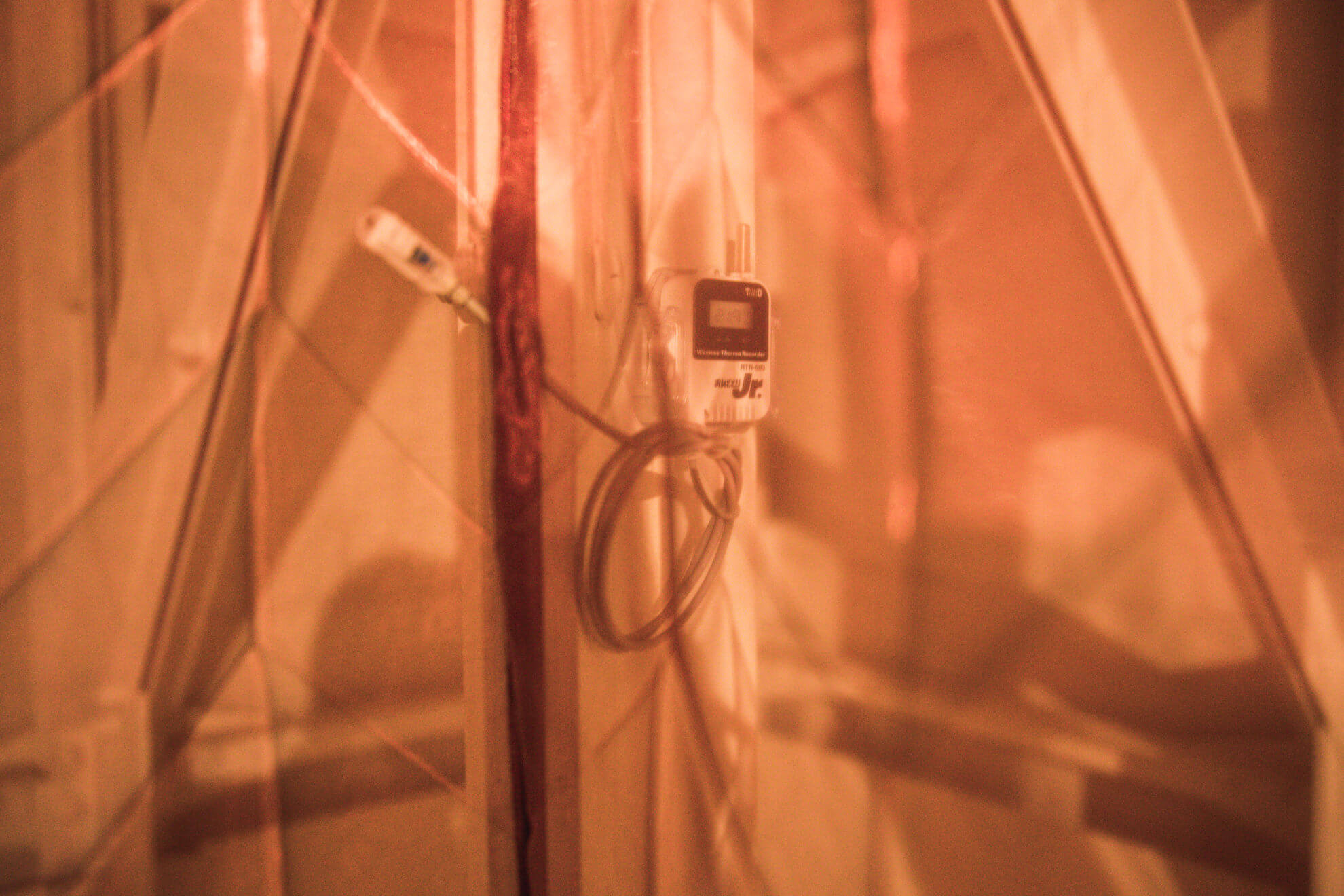 Q: Why did you choose the wireless RTR-500 series?

Mr. Hisatsune: To be honest, we started looking for a thermometer after the building was completed, so one important factor was that there was no need for special wiring or power supply installation. Since LAN wiring was already installed, we decided on the RTR-500NW to collect data and send it to the cloud-based T&D WebStorage Service. 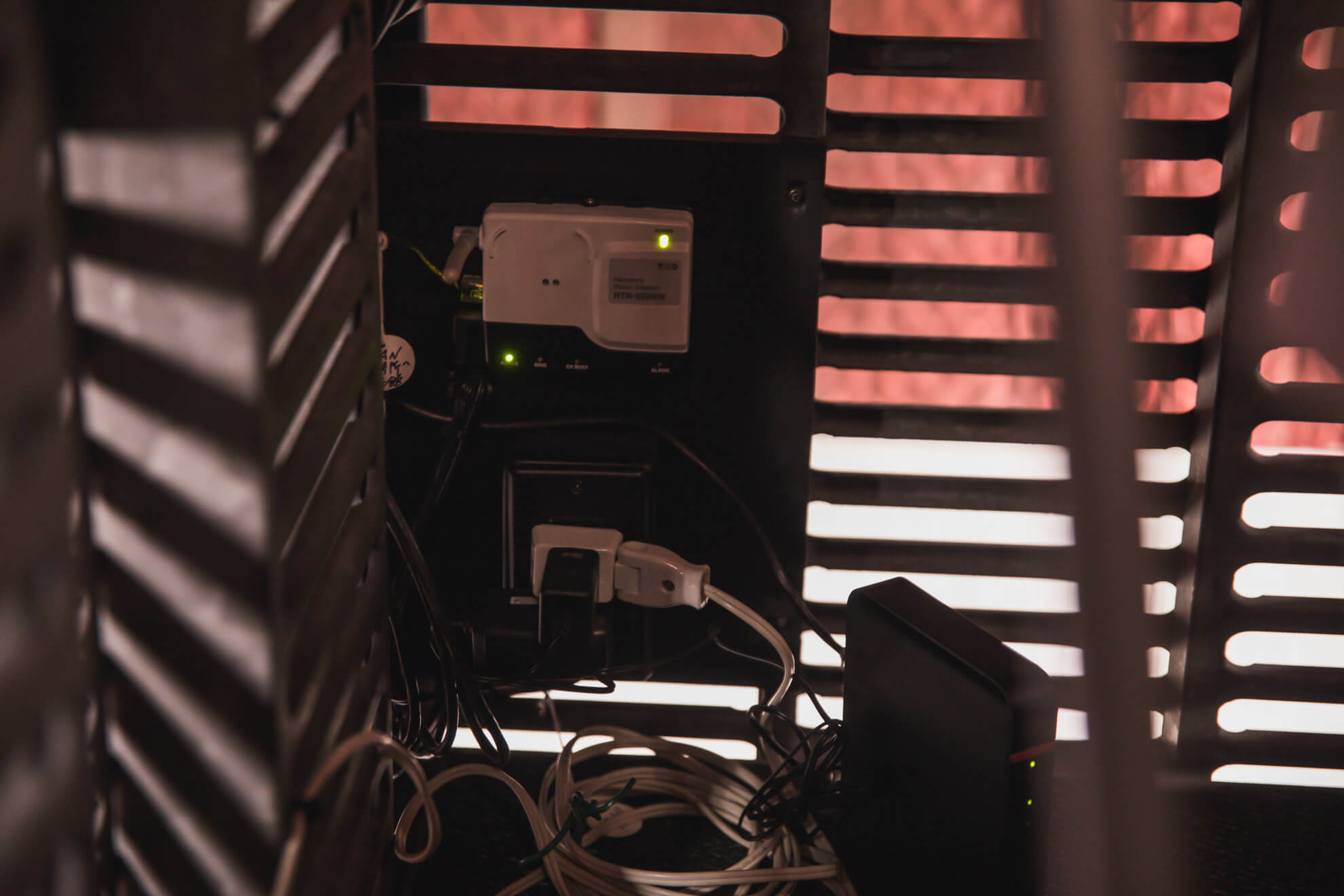 Q: You are using the RTR-574-H. Are you obligated to measure illuminance and UV? 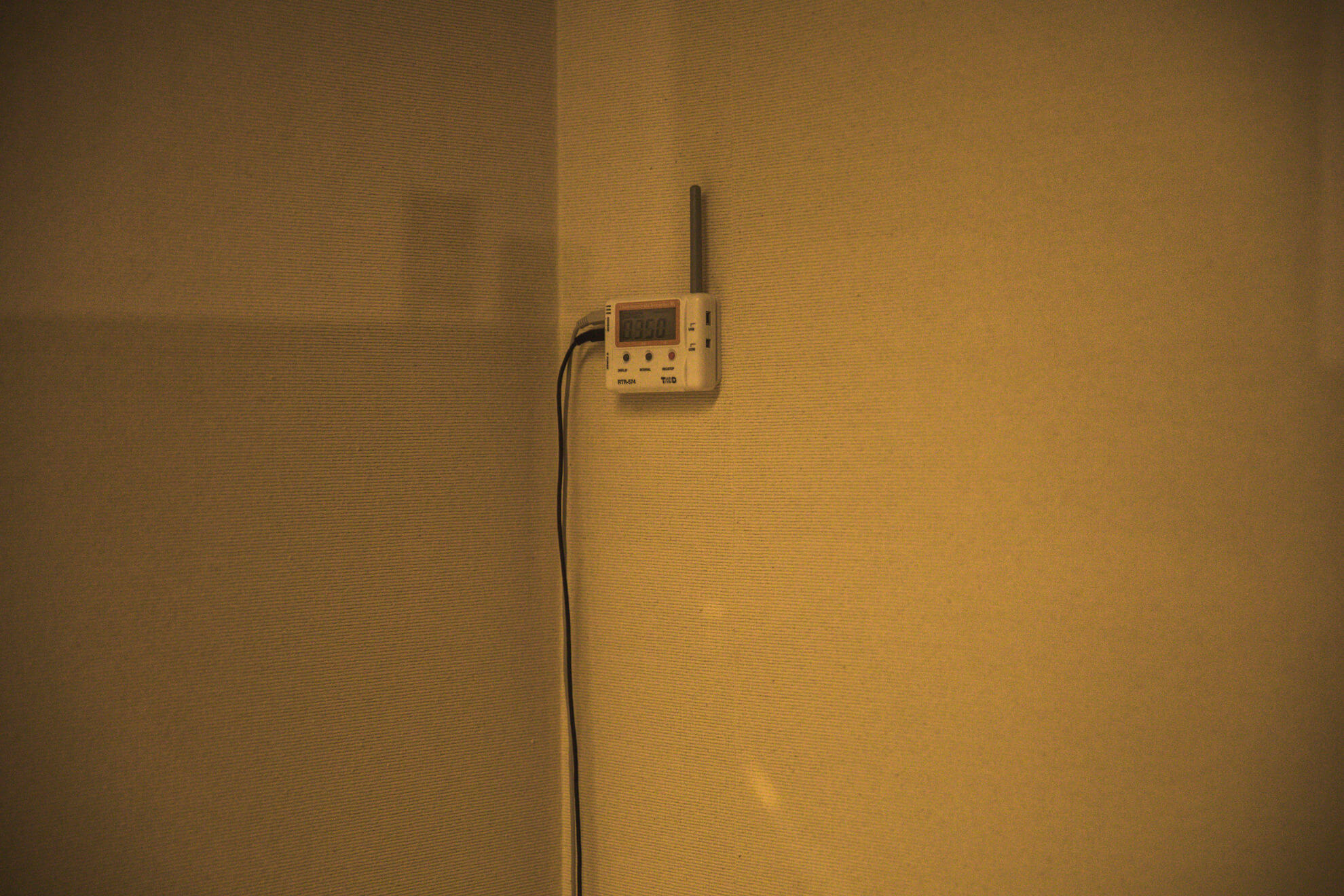 ―― Thank you so much for sharing your precious time with us today.

After talking, we took a walk around the temple grounds. Indeed, as I had been told, some buildings had bright Chinese style coloring, which offered a very unique impression. Moreover, it was also the time of evening services, so the ringing sounds of hand bells and chanting echoed through the air. This too gave me a feeling I was somewhere different and special. I thought about the strange mixture of preserving ancient treasures and traditions with modern IoT devices like ours. The official website of Manpukuji Temple also has banners for Instagram, Facebook, and YouTube, and are sharing information on seasonal events. With an eye on the necessity to preserve tradition, they are actively using modern tools such as IoT devices and social networking sites. It was a day that gave us a glimpse at the wonderful collaboration between history and IoT. This year marks the 25th anniversary of the launch of our flagship compact data logger. We, too, will continue to devote ourselves to 350 years of history!
The official website of Manpuku-ji Temple, where we visited for this interview, can be found below. If you ever are in Kyoto, please stop by and see it for yourself! 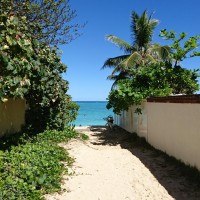